Chilika Lake – Asia’s largest brackish water lagoon with water spread ranging from 1165 sq km m the rainy season to 906 sq km in the dry season is nestled in the heart of the coastal Odisha (Orissa). It extends from Bhusandpur in Puri district in the North to Rambha-Malud in Ganjan district in the South, separated from the Bay of Bengal by a 60 km long narrow strip of marshy islands and sand-flats.

Chilika is recognized as one of the most important wetlands in the world because it is home to a phenomenal variety of birds. Chilika Lake offers visitors a spectacular display of its colorful avian charms in a thousand different hues presented by over 190 species in the peak season between November and February.  Odisha Government in a move to boost water-based tourism in this region has now decided to start houseboat operation in Chilika Lake. Tourists those are touring for vacation at chilika for Cruise in Chilika Lake, sightseeing of, and Sea side area inside the island, can book best resort at chilika, Lake.

This year, Chilika Lake Receives 11 Lakh Birds of 184 species which is a record itself. The annual bird census, conducted by Chilika Wildlife Division on Sunday, revealed that in spite of cyclone Fani, that left a trail of devastation along Odisha coast on May 3 last year, there has been an increase in the number of migratory birds to the lake by around 58,000.

As per the avian census report, a total 11, 05,040 birds of 184 species have congregated at the lagoon this winter. Nalabana island, spread over 15.53 sq  km area in the lake, a winter home for migratory birds from the Arctic and Sub-Arctic regions, received the highest number of 4.06 lakh migratory birds of 114 species, sources said.

CDA officials said rooting out of prawn gheris and other such measures to protect the Chilika eco-system helped in increasing the bird population in the lagoon this winter.

According to CDA Chief Executive Susanta Nanda, 162 sq km area from where the net gheris have been evicted to free the area from any kind of encroachment has become the new congregation place for the birds and dolphins.

Areas like Gurubai and Parikuda have turned into prominent bird visiting areas with the presence of a large number of migratory ducks and geese. 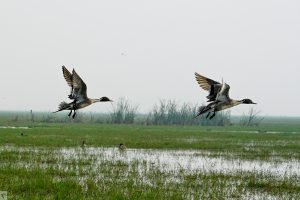